mattytwohats is a recovering nomad with an ability to weave powerful yet familiar vocals over a mess of noise and chaos into something accessible and coherent.

Well I have my first EP out now on Spotify. “Limerence or Love” is the first single, its a gritty rock number with fuzzed out guitars, chunky bass, garage rock drums and melodic vocals. Its a nod to 90’s rockers Jane’s addiction, probably a little nod to Jack White and more modern rockers like Royal Blood. The production makes it fresh enough for release now in 2020. We are just wrapping up the video soon and will be ready by Feb.

What is the local scene like in Brisbane Australia?

Well we have a great tight knit community here, it is spread out into the suburbs now and with all the gentrification brings local ale houses and micro breweries which I think influences how music is sent out into the ethers. Me and a bunch of pals rent a studio set on an old aboriginal tribal meeting place called “Hunting Grounds Studios” and its a real proper community there of producers, artists and general rock n roll riff raff.

You have travelled extensively over your youth do you think that influences the way you make music?

It definately does. I mean I learnt to produce music in Toronto Canada when I was working as an intern at Vapor Music which does mainly music for commercials. It taught me to work really fast to tight deadlines and not overthink things in the studio. It also taught me that whilst I can write and compose music in multiple genres, rock is my first love and definately my strength. The other thing I love is a great hook in the vocal lines so I try to make the vocal super accessible and the music kinda messed up and not quite perfect. When I travelled I was often making music on my own but this time around I brought in some friends to play drums and outsourced mixing to Italy so it has a bit of a different flavour to it. 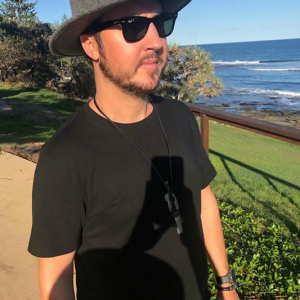 What is the new single based around lyrically?

The main lyrical content in this song is based around Limerence which is something I can definately relate to in the modern world of dating that I was in a few years ago. I think the technology of now is pushing a lot of millenials into limerence type relationships rather than the longer term love ones which was much more common a few generations back, but time will tell. I think 2020 is definately a year for whatever goes goes with out any judgement attachments.

What does the future hold for mattytwohats?

I’ll be continuing to promote the EP and there will be followup singles released through the first half of 2020. We are developing and online presence and are looking to do a live show or two in the future, that will be up on youtube and other sites. Check it out on spotify today and feel free to shoot me a DM on insta I’m pretty active on that one.

“I Won’t Change” and “Back it Up” are the hot new drops from ‘Handsum Santiago’.

0
“I Won’t Change” and “Back it Up” are two new singles from ‘Handsum Santiago’. With his silky smooth voice, charismatic stage presence, and jaw-dropping physique, Handsum Santiago has quickly established himself as one of the most vital talents in modern music. Since emerging with his debut Release EP...

0
Blow_Flyy who Performs out of Toronto...

0
What is your background/origin? I am...